You can easily identify a plane and track its flight path by using the Flightradar24 or the WebTrak web site. Just go to the site and tap on the image of the plane moving over Sunnyvale. You will learn a lot, including the type of aircraft, its origin and destination, its call number, and its speed and altitude. For an arriving flight, you can also follow its flight path to its destination.

When filing a complaint, it is helpful to use one of these sites to confirm the plane’s destination and to be sure that you are filing your complaint with the correct airport. You will also want to note the time when you heard the aircraft fly over your house. If the plane sounds especially loud and low, you can determine its altitude on the web site and include that information in your complaint.

Below is a screen shot from Flightradar 24. The flights on this web site are shown in real time. Sometimes, however, a flight does not appear on the screen. In the case of small aircraft, information about the destination airport may not be available, and you will need to track the plane until it lands. Most of the time, these small general aviation planes that fly over Sunnyvale are destined for Palo Alto Airport. 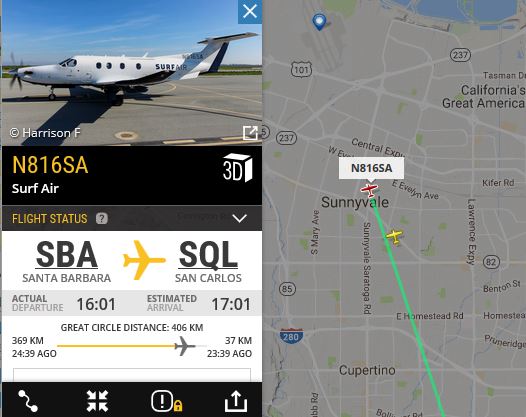 Below is a screen shot from WebTrak. The flights on this web site are not shown in real time. The data are delayed by 10-20 minutes. On WebTrak, Surf Air flights are designated “URF.”

When identifying and tracking Surf Air flights, you can also determine their arrival times at San Carlos Airport by using the FlightAware web site. These planes usually fly over Sunnyvale 5-10 minutes before landing. Below is a screen shot from this site. You can also visually identify a Surf Air plane by its dark-blue underbelly as it flies overhead.